Although the scoreline suggests this Edinburgh Derby was an uneventful affair, it actually wasn't the case and both teams will feel a little aggrieved that they didn't manage to grab a win.

There were certainly enough half-decent openings in what was an end-to-end contest between two well-matched teams - albeit sometimes devoid of proper 'cutting-edge' quality in the final third. Matt Macey and 'Scotland's Number One' Craig Gordon both made important saves to keep the game goalless and will earn plenty of plaudits for their respective displays.

Hibernian were perhaps the stronger side who showed more intent; beginning and ending the game positively and defending resolutely enough to limit Hearts' threat. In comparison, the hosts sometimes looked a bit wayward in defence with a few stray passes ending up at the feet of an opponent high up the pitch which ought to have been punished but weren't - partly due to Gordon's saves.

A point apiece means both teams remain unbeaten in the Scottish Premiership this season and that'll be enough of a consolation prize to keep everyone happy. However, knowing a win would have put either side top of the table, there'll also be a lingering sense of frustration in both camps that they didn't win yet had enough opportunities to do so.

Although the Edinburgh Derby has been on my 'to do' list for a while, seeing it now was something of a bonus. If cheap rail tickets through LNER weren't available then I probably wouldn't have even ventured north - and even then, my main reason for doing so was to tick off a visit to the Balmoral Stadium for the game between Cove Rangers and Montrose with my overnight base, as usual, just happening to be in Edinburgh! It was fate that this game happened to be switched to the Sunday and I was also able to secure one of the 500 tickets which were available through General Sale but had sold-out within less than half-an-hour of becoming available!

That paved the way for a great atmosphere inside Tynecastle and it was the 3,600+ Hibernian supporters who initially had more to shout about as their team started the more brightly, enjoyed more of the early possession, but couldn't succeed in the simple task of staying onside at set-pieces.

Hearts gradually grew into things and went close to an opener for the first time when Ben Woodburn let fly with a vicious strike from outside the area which whistled narrowly over the upright, before the home fans were left screaming in anger at referee Nick Walsh who penalised Liam Boyce for a foul on a Hibs defender as he sought to get into the box. Gary Mackay-Steven also had an attempt parried wide by Matt Macey.

There was an end-to-end ebb and flow about proceedings, though by no means frenetic, and Jack Ross' team looked slightly the more likely to grab a goal before half-time. After a speculative right-sided cross by Joe Newell clipped the woodwork, Craig Gordon twice thwarted Martin Boyle - firstly with a one-handed save from a long-range effort and then with a fingertip save after the striker had accelerated past Beni Baningime and got a shot away which, remarkably, resulted in a goal-kick. It was the sort of decision which summed up the officials' ineptitude as their overall decision-making wasn't the best to put it mildly!

Robbie Neilson probably demanded a bit more positivity and intensity from his players during the half-time team talk and they responded with a decent spell of pressure after the re-start in which they were on top for a while but just lacked a cutting edge to get an opener.

Both teams squandered gilt-edged chances within less than a minute of each other leading up to the hour mark as Kyle Magennis should have done better from close-range for Hibernian having capitalised on a defensive cock up, before Woodburn slipped an inviting through ball towards Mackay-Steven at the other end who was superbly denied by Macey.

That set the tone for a tense final 30 minutes during which Barrie McKay's introduction (and subsequent positive impact) added an extra dimension to Hearts' threat.

Mackay-Steven saw a more speculative attempt palmed wide in another attack and Macey then also foiled substitute Josh Ginnelly who got his head on McKay's cross towards the back-post area but needed to make a better connection to really test the visiting 'keeper.

Hibernian finished by the far the stronger of the two teams and a flurry of chances in very quick succession should have ensured they took the points back to Easter Road.

Alex Gogic was invited to shoot from the edge of the area and saw a venomous attempt fly narrowly wide of the target. Moments later, Kevin Nisbet broke in-behind and squared the ball back perfectly towards Magennis who was up supporting the attack but drove his shot at Gordon - thus allowing the 'keeper to make a save. The Hibees' No.7 ought to have done much better and the same could be said of Nisbet two minutes later as he wastefully snatched at a chance - firing over from just inside the box following a flick on where he had the time and space to bring the ball down and do more.

The profligate finishing kept Hearts' hopes of three points alive and they nearly achieved the bragging rights when Paul Hanlon turned his backside towards a low cross - inadvertently causing the ball to loop both upwards and backwards and almost creeping over a back-peddling Macey who somehow spared his skipper's blushes by tipping the ball over at the expense of a corner.

Four minutes of injury-time brought about more excitement as Nisbet and Magennis forced more saves from Gordon but a breakthrough never arrived. 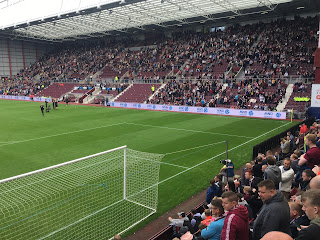 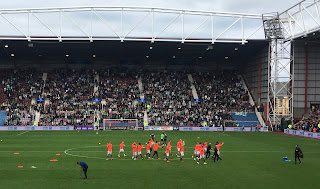 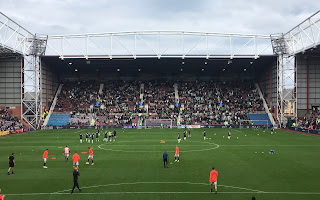 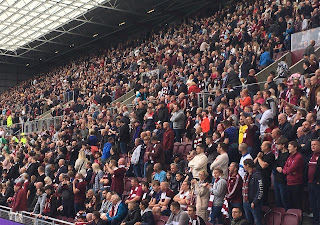 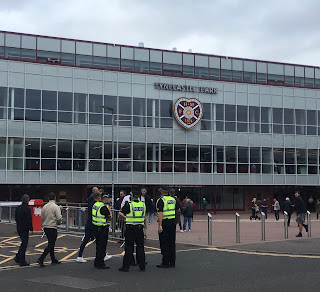 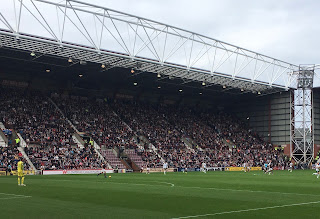 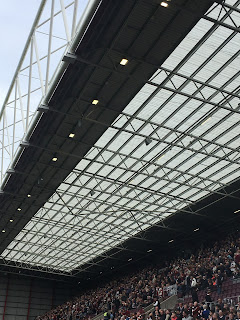 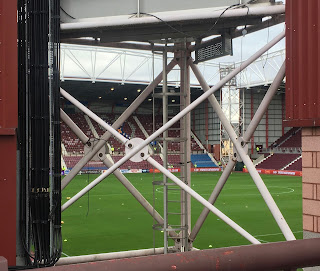 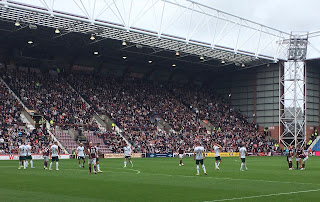 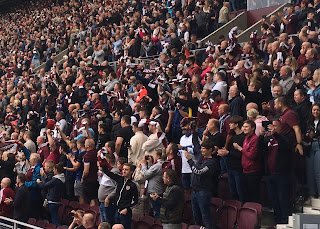 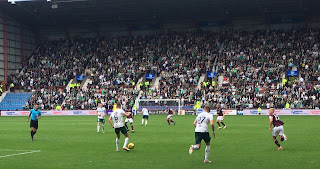 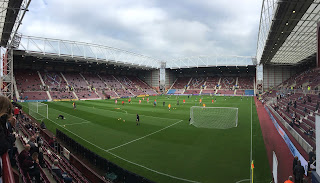 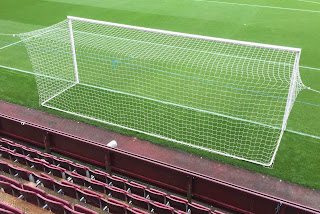 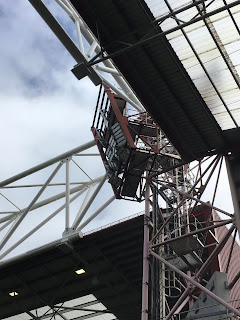 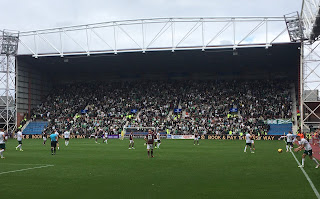 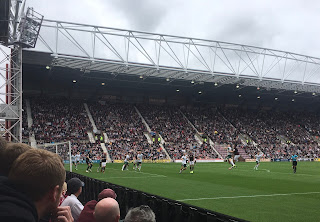 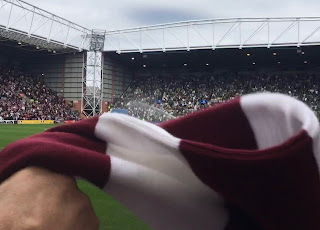 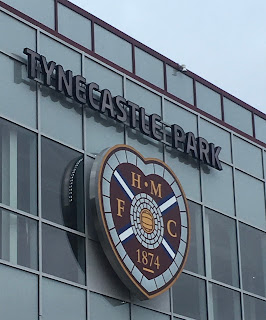 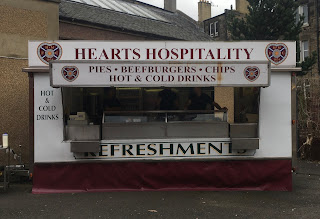 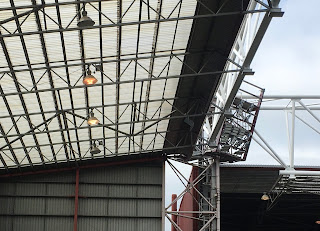 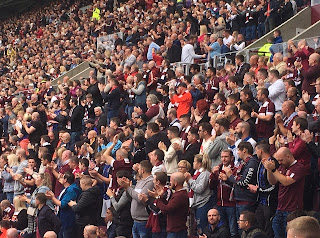 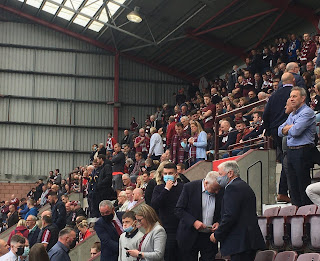 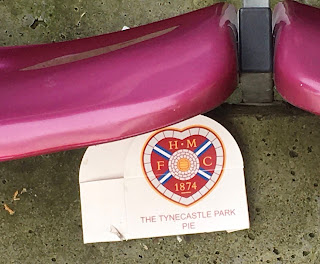 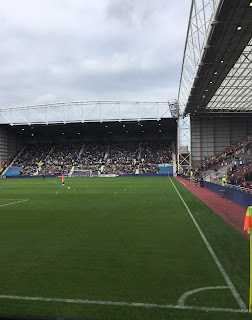 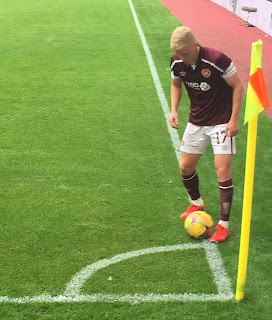 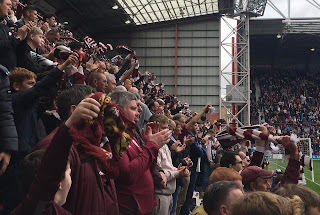 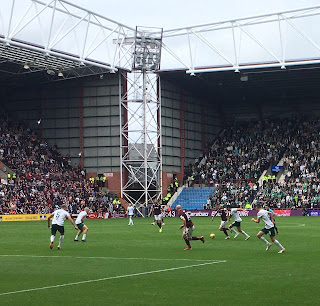